As a disclaimer, I’m both patriot and proud to reside in the greatest country on this planet. America. That said, my name is John Davis and I approve this message.

WARNING. The following blog, if entered into with an open mind, may or may not alter the way you see everything around you. If you are comfortable living in your bubble, take the blue pill. Otherwise, grab the red pill and sit back as I expose you to the truth. 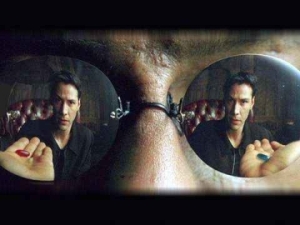 A few years back, when I was beating the political drum as hard as possible, my Facebook inbox began to blow up. Each message filled with links. To be honest, I thought my friend’s account had been hacked. So I contacted him personally. He confirmed the links were his and asked me to give them a look. So I did.
I’ll throw some links your way during the blog as well, but let me just say, I no longer beat the political drum. The Republican party and Democratic party exist for a single reason. To divide us. Our country(if not the entire world) is controlled by a handful of very powerful people, while we are controlled by the media.
It’s common knowledge that Fox News and CNN each favor their own political party, but if you trace deeply enough, you’ll soon discover that EVERY major source of news is majority-owned by the same handful of people. What I’m saying is everything from national news, to television programming, fashion trends and what’s socially acceptable is controlled by a single group of multi-millionaires/billionaires.
Simply put, we are plugged into the ‘matrix’ through our television sets, phones, computers and tablets. Which, by the way, was the true message behind the Matrix movie. Like sheep, we are forced to care about subjects that are handpicked for us, vote for pre-selected candidates and told how we should be living based on the world around us. A world that is also plugged into the message they are broadcasting. Political parties were created to divide the intelligent, which allows this group to operate behind the curtain with very few left to question. Kind of like the Wizard of Oz(Oh, by the way, the message that movie was meant to deliver as well). Divide and conquer.

But how far does the rabbit hole go? Let me present you with some startling facts.

911
*Airplane black boxes were found at Ground Zero, according to two first responders and an unnamed NTSB official, but they “disappeared” and their existence is denied in The 9/11 Commission Report.
*Building 7 was reported as having collapsed on live television, with video of building 7 standing in the background(it fell 20 minutes later). Moments later, the video feed became disrupted.
*Several first-responder firefighters were ‘let go’ prior to a planned interview, one in which they would publicly testify that explosives could be heard going off in the corners of the towers.
*The put option(financial bet on Wall Street that a stock will fall) was 285 times higher on American Airlines only days prior to 9/11.
*A declassified government plan from 1962 outlines hijacking airliners, attacking military bases here in the United States…all to be blamed on Cuba in a pretext to an invasion of Cuba.
*Several foreign/independent studies have all concluded that the airliners which hit the towers on 9/11 were carrying some type of cargo beneath them consistent with additional fuel storage. Confirmed by video broadcast from CNN and photos published by Time magazine.
*Small flashes consistent with remote detonation can be seen on the attack planes a split second before impact with the towers. Again, this can be noticed in CNN’s own footage by slowing down to a frame-by-frame rate. The flashing occurs at the tip of the planes, with a visible gap between the planes and buildings.
*Oh, and let’s not forget, a huge amount of money that was supposed to be accounted for by the government was found missing. That was discovered on 9/10 by a group working in…the trade centers.

But why would a group of wealthy Americans attack our own landmarks? Maybe you are asking the wrong question.
Why would the world’s most oil-dependent country attack it’s own landmarks, surely to spark a public outcry, only to place the blame on a country dead-center of the world’s richest oil region?

Question? If we were originally told through the media that we were entering the theatre of war to find Saddam Hussein and place him on trial, why did we remain after his death? Bin Laden. Question, if Bin Laden has been killed, why are our soldiers still putting their lives on the line for this region? We’re told(now) it’s because the area isn’t capable of defending itself. As an American, you are entitled to believe what you will. And sadly, most of us will not afford it a second thought, simply processing the information we are fed. Personally, I believe we are still destroying families as soldiers fall because we have become too dependent on oil from that region.

Is this group who controls our people really capable of such an act? That’s for you to decide. Some believe they were also the force behind the attack on Pearl Harbor, and sadly, there is some evidence to support it. But that’s another story for another day(but Google it if you’re interested). Just know that political parties exist for a reason, as does lobbying. You’re fed a tragic story of murder by handgun and then hit with a story on the debate for gun control for a reason. And there’s a reason ‘celebrities’ like Beyoncé flash the Illuminati symbol during the Superbowl Halftime Show. Just in case you missed it.
http://www.google.com/search?hl=en&site=imghp&tbm=isch&source=hp&biw=1342&bih=664&q=beyonce+illuminati+proof&oq=beyonce+ill&gs_l=img.1.1.0l10.605.2829.0.4807.11.7.0.4.4.0.138.695.5j2.7.0…0.0…1ac.1.5.img.F4p0tB6LkVo#imgrc=_

In closing, you’re free to believe what you will. Maybe it’s merely a thousand coincidences stacked together, though there’s a better chance of getting hit by lightning seven times in a row while indoors. Personally, I chose to unplug myself from the Matrix and see the world for what it truly is. Now, when I watch the news, it’s almost laughable. I’ve learned to see through the world that has been painted in front of me. I invite you to do the same. This blog has more than likely lulled you to sleep 🙂 so as you finish and begin to wake up, please do wake up. Begin to see the world for what it truly is.

“We feel like we are living in the “Matrix” where we can blend in, but knowing something is horribly wrong and must be exposed. The quality of life for all of our loved ones is at stake along with the hopes of millions of people for a world of peace, freedom and ecological sustainability. If just a few of you take the time to study a little more and become involved in the 9-11 Truth movement we will be greatly appreciative. We strongly feel that everyone should involve themselves in this effort to expose the truth about 9-11 and in the greatest push ever from the grassroots to nonviolently replace our current despotic leadership. It would have tremendous positive consequences, if similar to the fall of Nixon over Watergate, that the Bush administration was exposed on this and replaced. This outrageous criminal act must be brought to justice and our freedoms restored. We need to reach out now to all those who may be willing to hear, break the silence and take courageous action.”

3 thoughts on “The Matrix”