The NFL has been in decline for several years – from tickets sold to viewership at home. I’m going to lay out a handful of reasons why I think the NFL is dying a slow death. Well, death may be a little too bold. I don’t think the NFL will ever die out completely, but I do believe they’ll eventually lose their crown as America’s top sport.

Concussions. Players are retiring at an earlier age (on average) and young people aren’t lining up to play like they once did. I believe this is largely due to the risk of concussions, but also due to the fact that our society has become heavily dependent on the internet for entertainment. Therefore, spending hours each day becoming a “super athlete” just isn’t appealing to most kids today.

Politics. This is a divided nation. I think that point is unarguable.  You can blame NFL players for kneeling or you can blame the U.S. President – either way, the NFL loses. If they scold their players, they lose the politically correct left and if they continue to leave things as they are, they lose half of their fans via the right. This is an absolute nightmare for the NFL. 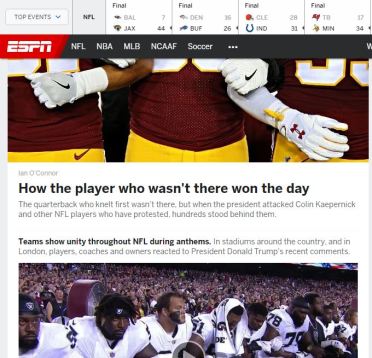 The Football. These are the best football players in the world, yet most sports pages are no longer talking about the game. Tebow is praying. Michael Sam is gay. Players are kneeling. In fact, ESPN’s top FIVE stories this morning deal with the political side of football, not the game itself. Purists are leaving the fan base in droves.

The Competition. There’s a lot of competition out there, and most of it is fantastic. I actually turned away from the NFL and discovered the English Premiere League. It’s awesome! And, it’s a sport that I wouldn’t have found, had it not been for the mess that is now the NFL. In today’s modern world of fast internet and cord cutting options, it’s just too easy to follow the other major sports from around the world. Most of them care 0 for American politics, which is what fans are looking for when they sit on the couch to relax.

Greed. NFL players get paid, son. To offset the cost of paying a guy $20 million dollars a year to play a game, your ticket prices have been jacked up (explaining the failing attendance rates). You shouldn’t have to sell a kidney to buy tickets to a sporting event.

In closing I don’t believe the NFL is going to completely die out, but it is beginning to fall from the lead and shuffle back in with the pack. I’m leaving you with a list of alternatives that are easy to find/watch, and cheap (or free) to get. Enjoy!

http://www.lflus.com/ – Yes, it’s women’s football but the focus is on the game. Plus, these women can play!

https://www.nhl.com/ – These guys play for a tenth of NFL salaries and the focus is on the game.